skip to main | skip to sidebar
WONC in the news!

The east bay express just published an article about my house, the Burrow, and at my bequest that they maybe not give the address or proper name, went overboard with how illegal and secret it is/needs to be, including a ridiculous "west Oakland noise collective, or WONC" pseudonynm!  Pretty amusing, though the article itself is all over the place, probably due to the long rambling rant that passed for an interview getting turned into a story; of course it isn't focused!

The intro, and funniest section:
"During the last few months of 2012, about fifteen sound artists and noise musicians gathered in West Oakland to form a new collective for like-minded experimenters, from which they hoped criticism and creation would spawn. The founders are a who's who of the insular experimental music scene, including record label owners and underground venue proprietors, as well as the leaseholder of an established West Oakland DIY space, from which the collective takes its name. Out of fear that police may target its performances, which are often held in illegal spaces, the collective asked to remain anonymous, and hereafter will be referred to as the West Oakland Noise Collective (WONC). Despite being under the radar right now, the collective aims to expand the audience for the historically academic and obtuse genre."

Of course, it's my apartment and the apartments that we've gotten friends into that surround us, basically keeping our little shows free from neighbor complaints...  The most illegal thing I can think of that has happened there though would be smoking within 20ft of the building, and maybe the murders, if that's still illegal even.
Jk!

Cheers all, see you at WONC, see you at the burrow!!! Readers from the east bay express, please like our FB page!!!
The Burrow

Styrofoam Sanchez:
Styrofoam Sanchez are a three piece noise band out of Oakland, CA where
they run the Ratskin Records Noise Label since 2005, and run a small
distro for related labels and releases out of their homebase since 2010.
Their shows are in the rich tradition of costumed San Francisco Bay Area
freaks and weirdos such as Caroliner, Rubber((o))Cement, Hans Gruesels
Krankinkabernet, and dare I say The Residents, as Styrofoam live up to
their namesake in handcrafted costumes made of styrofoam, as well as
pulling from the bay areasâ€™ deep continuum of home made instruments,
with styrofoam instruments to match!

From Azkaos blog: "The band walked towards the stage dressed in suits
wearing helmets/masks carved out of styrofoam. These masks were TALL: it
looked like buildings made out of styrofoam had collapsed and landed on
their heads. They were more like spires than head-pieces, or like Carmen
Miranda hats made out of albino Cubist fruit. In addition to being their
headgear of choice, styrofoam was also their instrument. They scraped,
cut, and scratched styrofoam against mics, creating a harsh, tearing,
nasty sound. They even had wedges of styrofoam carved to look like
deformed guitars. One of the masked men started singing in a harsh
strangled voice, repeating the doom-y mantra â€œHuman, your skull will be
in a museum!â€ He sounded like he was embodying the spirit of styrofoam
itself, the rasping voice of consumer waste laughing that it would biode
degrade long after the last monkey rotted into dust."


Horaflora:
Horaflora, also from the bay area, is the name given to a particular solo
set of electroacoustic improvisation by Raub Roy that's been evolving
and advancing since first presented in San Francisco in 2007. The set
involves several semi-autonomous soundproducing devices which are placed
with care around the performance space to create an immersive environment
of bright tones and pointillistic ping-ponging pulses.
Homemade free-membrane bass tube, horn/balloon activated drums, and
prepared subwoofer are just a few of the instruments used in his
performances.

Horaflora has released vinyl recordings on the Hot Releases, Yeay! Tapes,
and Crazy Iris Record labels, has toured the US extensively, including a
bicycle tour of the east coast in 2008, and has been featured on Foxy
Digitalis and Crow With No Mouth, as well as in numerous reviews of his
recorded work scattered throughout the webscape.

Out now on Crazy Iris Records!

Email ThisBlogThis!Share to TwitterShare to FacebookShare to Pinterest
Horaflora SE Tour and New vinyls/cassetteHi friends, fans, and foes! Yes, I subscribe some foes to my mailing list simply to irritate them! The rest of you may unsubscribe simply by replying with "unsubscribe" in the subject.So, hope all is well with everyone, I'm writing to announce a short SE tour that I'll be starting on Sunday in Carrboro, NC and which will see me all the way through to Orlando, FL in 10 short days. Full tour schedule below!Before getting to that, I'd like to take the opportunity to reflect on 2011, which was a great year for Horaflora; I went on a total of about a month of touring (not including upcoming) to some new places that I hadn't been to or played before (Seattle, Portland, Olympia, DC) and some spots that I hadn't been to since the bike tour of 2008 (Philly, Providence, Boston, and NYC).... In addition to all of that, I played 2 incredible festivals: Savage Weekend in Chapel Hill, and We Are Guest Talk Free, $10 in Boston!Much of the touring was to celebrate and promote the several new releases of mine that came out this year: a split 7" record with Bromp Treb SoundSystem on Yeay! Tapes,  a new cassette on Nefarious Activities that's so new I haven't sold a single one yet, and a very short (5min total) split cassette with Julia Mazawa on Ratskin Records.I was hoping to be able to announce a new full length LP, my first non-split vinyl release, on Crazy Iris Records, and may have copies available on tour, but it's all up to the post office now! The new album is entitled "Craterellus Cornucopiodes" and features a slightly different mix of THIS net release on Install records, as well as a new studio work that mimics and reflects the A side but with completely different instrumentation and recording techniques, stay tuned for an official release announcement soon!The tour dates, all shows with the great acoustic-noise-vocal-duo Knight Howls (from Boston):12/11- Chapel Hill, NC @ Meadows of Dan w/ Clang Quartet, Horaflora, Afro dogsnake, Hem of his Garment12/12 - Johnson City, TN @ (PM show) Hideaway w/ Horaflora, Afro dogsnake, Existensia12/12 - Johnson City, TN @ (real late show) The meat locker inside the abandoned grocery store12/13 - Columbia, SC @ Conundrum w/ Horaflora, Brandon-X, The Choir Quit12/14 - Greensboro NC @ Science House w/ Horaflora, Afro Dogsnake12/15 - Atlanta, GA - Tunnel Show w/ Pony Bones, Subliminator, Horaflora, Afro dogsnake12/16 - Gainesville, FL - @ (early show) Lunchbox12/16 - Gainesville, FL - @ TBA w/ Horaflora12/17 - Jacksonville FL @ Morrison Pierce's Studio at Cork District Warehouse w/ Horaflora, Voids, S.O.S, Ascetic, Virgin Flower12/18 - Orlando, FL @ Tim's Pasta Compound w/ Horaflora, Pain Jetski, Zone Eater, Sslots12/19 - Orlando, FL - Live Recording @ Disney World's Space Mountain 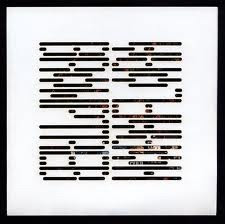 Both sides are rollicking, rolling, experiments in beat manipulation that compliment each other through a rhythmic wormhole that cannot be explained in words, and even the sound of said wormhole itself is quite difficult to grasp full hold of!

BrompTreb spins his reels of ragga-esque drum treachery through a broken meter bound in noise-tape lashings and a gruff patios calling for a true readiness on the part of all comers, dance on a wobble-leg of doubt and you'll surely fall to the fire!

Horaflora revs up the rolls for a twisting digital escapade, only to settle in for a tripping, lunging, lurch throughout the gearshift continuum that takes in auxiliary debris through the grill and sifts it into a fine mist and back out the trunk before a final cliffside donut sees him drift away down unknown lanes...

Fabulous sleeve designed by Sightlab that sees both artists rendered in a curious (player) piano-roll/IBM punchcard font that's been laser cut into the sleeve, offered sweet relief by individually selected pages of national geographic inserted behind the front cover and custom made rubber stamped release info: 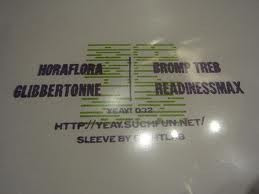 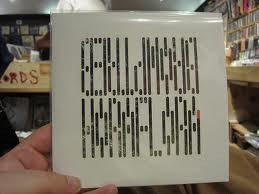 Grip this From Horaflora or BrompTreb (west and east coast)